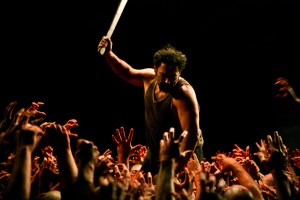 A posse of crooked cops, malevolent gangsters and a horde of walking dead are the centre point of this gruesome, tight, action packed, claustrophobic tale of retribution and escape. Penned like animals, on the top floor of a deserted high-rise block, these two opposing gangs find that they are not alone in the lair of bloodthirsty corridors of death. Joining forces to survive, they must reach ground level together or perish.

This French film is more of a surprise, it keeps it simple. Though adds some intrigue and fills in it’s story as it goes along. Even if at times the film or more it’s action scenes and story feel inspired by a video game.

Early in the film we barely get to know the characters before we are thrust into at first a cops and robbers revenge film that morphs into a zombie survival film. Though the tempo pretty much stays the same.

We don’t know much about too many of the characters at first so their demise isn’t as emotional. Besides it ends up they are pretty much the dead weight to give the audience the kills and deaths some might want. As soon we begin to learn about the characters at the heart of the siege. Though all of the characters are rough and tough. Some are more likeable and most are unlikeable as some are rogue and change what we previously thought about them. Which I will admit will turn the audience off to a degree on the film. Though it also adds some intrigue into the film. As well as shocking violence more against fellow survivors rather than the zombies.

They decide to forge partnerships but they are so easily combustible. Even within their own ranks. Like the characters the audience doesn’t know who exactly to trust. Even when they have an obvious common enemy.

What is enjoyable about this film is that even though we have seen these type of scenarios before. It’s really amazing to see a character just started out as minor become almost the star of the film with little to no warning.

The film also is so bleak as one of the characters who is likeable is an older bigoted war veteran. Many of the characters do cocaine to keep their energy up during the onslaught and our hero by the end we are not even sure we like them. As the anti-hero label gets used and majorly challenges with this film

The film’s cast is diverse which is nice, as you don’t see a Nigerian and a character of middle eastern descent as the stars of a film albeit especially a horror film set In France. but also the film has such a dark heart and isn’t afraid to make certain characters unlikeable. It has an attitude and can be tasteless. That is why I have so much respect for the film as it isn’t necessarily an audience pleaser. So that for something familiar it feels like a breath of fresh air.

It has gory more horror type violence but also revolves around more typical action sequences. only here the enemies just keep coming unless you hit them in the right spot to stop them.

The film doesn’t offer an explination and focuses on the survival of the characters we get a sense that the zombie problem has become wide spread across France but in the film the characters are more concerned with surviving their situation before they can worry about global ramifications.

I only wish the direction of the film could be as sharp as the story, plot and mood. It has satisfactory direction but never rises to the level of it’s story.

I am shocked no one has tried to remake this film in America, of course some of the elements would have to be white washed to make it more commercial. This probably drawing the film of the quality that made it so special in the first place.

This is a tight zombie film a little off the beaten path, but a welcome entry. As it has the attitude and instincts of John Carpenter just not the hallmarks or talent. Especially when it comes to the soundtrack. The film could have used more of a moody score instead of bombastic orchestra type music. That almost ruins some scenes it gives them a slight inclination that could easily weaken it.