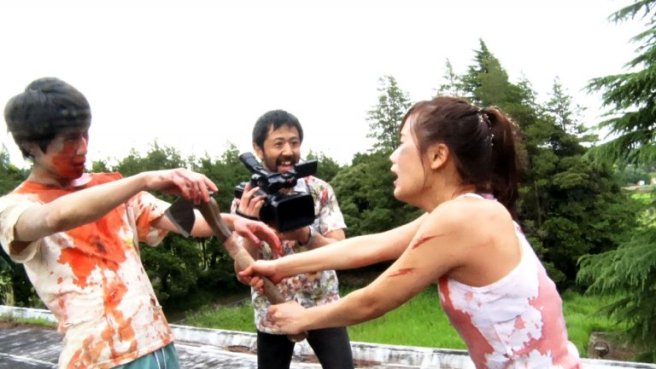 Written, Edited & Directed By: Shin’ichiro Ueda
Based on a Play By: Ryoichi Wada
Cinematography: Takeshi Sone

A low-budget film about zombies soon features the best cast money could not buy, but the problem is that the new actors are not exactly getting along with the crew. Everyone involved is soon receiving a lesson in the merits of perseverance, the preciousness of family bonds and of course the dangers of the living dead.

The Original title of the film “Kamera wo tomeru na!” in Japanese means “Don’t stop shooting!”.

This film is ingenious especially if you are into movies about filmmaking and D.I.Y. filmmaking. It constantly walks a tightrope and comes out ahead as it continues to challenge itself.

This is a film end to go into, watch and experience blindly.

As the film starts off as a making of horror film. Then becomes an actual horror film. Then about faces Into how the making of that film came about Abd not only reveals itself to be a live broadcast but we see how all of it was for. And Maintained. Including the many accidents.

We also get to see some of the off camera drama and situations.

So like the play and film NOISES OFF we see the production plus what goes on behind the scenes to make the production work under more comedic circumstances, while balancing so many plates all at once. You stare in amazement, also the film we are seeing at first is done In One shot which is the initial attraction.

This is a fun movie where the joy is infectious and just watching it draws you in. As to get to see the moving parts of a production and all the mounting individual problems. With The director wanting to do this for his daughter and casting the lead to impress her and her finding new found respect for him in watching how hard he works at his craft and this production to make it work. You have actors who end up drink or get way too into character. How the accidents that happen actually accentuate the work giving it surprises and more dimension that weren’t expected.

The films allows for a healthy amount of humor. It stays perfectly level never over or undercooked

The Sun character Urging the characters to forget so much the fanatical and business sort of the game and get back to the fun of playing and watching. The spirits of the game having passion for what you are doing. Not treating it like a job.

Every actor major or minor has a strong role to play. Which shows how every element of a production is important and needed. If not for so many locations and reveals at the end.

The films opening. Is a 37 minute continuous take of a horror film. The following hour of the film is the backstory. Most of the cast paid money to be in this movie, at least initially, because this was a final product of an acting and directing workshop called ENBU Seminar.

Supposedly the cast performed the one-take scene perfectly on the second try, but a crew error led to the cameras stopping during the take and it being unusable. In the end it took 2 Days and 6 takes to finally get it perfect.

Where fans of horror might be disappointed that this movie turns out more to be a comedy. Not only that but a kind of happy and wholesome ending. That is more positive than fatalistic and offers a positive look of female empowerment.

Where even the directors daughter gets involved to stop being a fan to actually creating something and becoming In control.

I know this seems like I am spoiling the movie. I Will admit again it’s best to go into this movie blind. But the enjoyment of the film Can’t be taken away by explaining away scenes. It’s just best to experience it yourself.

As this film shows the rigors and magic of do it yourself filmmaking plus the fun of putting together and making a production.