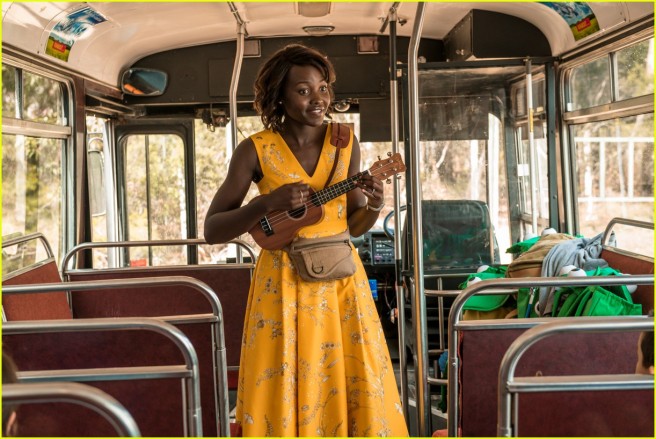 A washed-up musician teams up with a teacher and a kids show personality to protect young children from a sudden outbreak of zombies.

I have to say this movie took me by surprise. Was expecting something in the vein of COOTIES. Where the adults have to fight off kids. Instead this is like a comedically inspired zombie riff on LIFE IS BEAUTIFUL mixed in with DEATH TO SMOOCHY, Though one can admit that the movie is a fun genre exercise. It is still more comedy than actual horror.

It’s like the little engine that could. As she you are ready to define it and put it off as typical or some kind of film where you know what will happen it manages to subvert your expectations and really get into it. As it has more humor then you might expect.

Lupita Nyong’o is the biggest name in the cast and even as she more co-stars in the film. She is the true star as she is the most impressive and see’s the most action. All while playing to more comedic sensibilities. Which we haven’t seen he play as much. As there is a character played by Josh Gad who is a kids entertainer and also a kind of angry, suicidal sociopath and the evilest character in the movie. She makes a great impression as this is her first more comedic character and thigh her character is more a supporting one. She is the most take charge and seemingly toughest character throughout.

The film makes all of this seem precious due to the innocence and cuteness of the kids.

Though there is violence and action the film isn’t overloaded or singly focused on them. It is more about Survival and keeping the kids thinking this is more of a game.

Though the film has more adult material it is actually one of the funniest films I have seen all year. It truly makes one laugh out loud. From it’s Dark humor and it presenting humor where it is not expected and most of it comes out of character based comedy not a general sense or set-up.

What helps is that the film allows various characters to be funny and have their Own moments not just the leads.

The film even knows when to lay on the emotional heartstrings and it not feel annoying or manipulative.

I can’t Say the film offers revolutionary filmmaking or style but it does manage to make a pretty affecting production out of what at first just seems like more of a genre comedy.