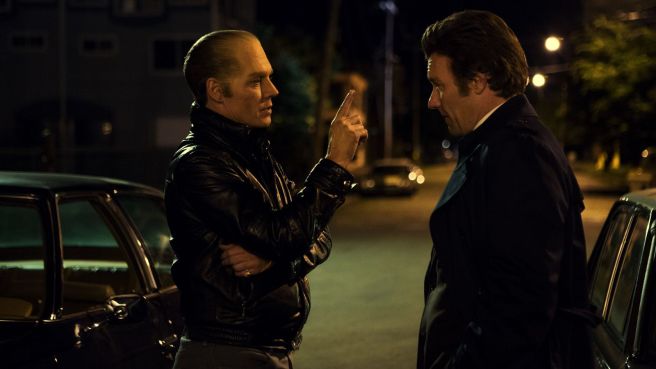 Based on a true story of James “Whitey” Bulger, an Irish Mob godfather and FBI informant who had a “secret trading” deal with his brother, William “Billy” Bulger, a state senator and a Boston public figure, and John Connolly, an FBI agent. They planned to take down the Italian mob and mafia in Boston, which went awry and things turned massively violent. When the credence for each other began fading out, drug dealing, murders, and extortion started to rise, and forced the FBI’s Boston office to confirm that Whitey Bulger was one of the most notorious criminals in US history and also one of the FBI’s Ten Most Wanted List criminals.

Johnny Depp has claimed that this is his favorite of all the films he has been in considering the classics and well remembered films and performances this should have been quite a statement. Only I can’t agree at all with his assessment. This doesn’t even come close. I can only hope he is more talking about his personal experiences filming. As while he is very good in the film. The film still feels like a disappointment to a degree.

The film has a feeling of self importance that the audience never feels. It is shown plenty of times and in some scenes the stakes of the drama are high and you feel the film taking shape as a character piece, but in ends up feeling more glossy as it feels like the audience is guided through an overview of the events of the story and Whitey Bulger’s reign

Sure there are scenes set-up to delve deeper into it and showcase as well as inform the characters and story more but they seem like straining stops in a train moving fast towards the end. It’s destination.

The make-up on Johnny Depp isn’t as distracting as it looked in the trailers. Where it made him look dead-eyed and almost like a zombie. Leaving me to worry that the performance would be a slave to the make-up and that the make-up would be too much of a distraction to notice the performance. As he at times looks like one of those Dick Tracy gangsters. Like an oily weasel who never changes his outfit really. Or a 70’s set SIN CITY character. Though they could have made this a totally different film. Zombie gangster a reason to never fear anything he’s already faced death lost and made a comeback.

Even as the movie is based on a real life person as the unanimous villain of the film who spooks all the characters with his odd and non natural look. The film plays more like a real life horror film with a made up monster in the middle who hunts and haunts everyone even his adversaries

Johnny Depp here is good and creates a good screen villain, but not a memorable human being character as this is all based in a true story. He gives a performance less cartoonish and more fleshed out. Then his recent films, but he only delves as deep as the film allows him too and about as deep as the film gets.

The film seems more devoted to trying to get the whole tale out in the time it has and make some scenes more personal rather than action.

Another theory could be made Like the fact Depp’s Bulger’s seems to usually wear the same clothes and never seems to age unlike most of the other characters. Who the film seems to go out of it’s way to show time has passed. So he seems like a vampire.

I wonder if that was the effect the film makers were going for as he seems to feed off others and underlings. Yet always lands on his feet and never feeling anything as all those around him seem to suffer and slowly uses their humanity.

While nice to see certain cast members who fill out the rank. A good mix of recognizable character actors and up and coming actors. As well as known actors alike. They all get their screen time. The only other actor who really makes s debt is Joel Edgerton, he has the more crucial and showboating role. The career charismatic FBI agent looking to move up by making deals and enabling his childhood friend. While letting him commit crimes and take over the crime syndicate around Boston.

We watch his character lose his soul. Where as we already know that Depp’s character is pure evil.

Joel Edgerton’s character has a bravado her allows him to not really see how blind he has been to these dealings and how corrupt he has become as well as those around him. Yet still feels like he is doing nothing wrong. More business as usual. The film could have delved into that more. As that seems to be where the real drama lies, but then would have made him out to be more sympathetic and maybe have the audience gain a bit more sympathy for him. When really we are meant to see how even with characters of questionable morals. They seem to be dragged down into hell more by the devil that is Whitey Bulger’s character. Who makes them filthy. When before they were only dirty

With so many actors who are recognizable and some considered stars. So many to fill all roles. Big and small. It’s almost an all star extravaganza. Which also hurts the film as there doesn’t seem to be a particular reason for them to play their rather small roles or even be in the picture. Maybe they wanted to work and build a relationship with the director or believe in the material as it was a hot topic.

Yet it makes the film feel overblown and like this is all one big acting exercise rather then a film interested in telling a story. As they seem to play against type or some to their type.

Scott Cooper who made a blast with his first film. CRAZY HEART that was nominated for many academy awards and Jeff Bridges won an Oscar for, since then he has made this film and OUT OF THE FURNACE. So he has a history of getting big name actors for his films to play smaller roles. Here the film seems like an attempt to tell the story but being rushed by production demands, the legal department as these people are still living or maybe, just a big budget film and the studio demands.

Scott Cooper seems a director who is more focused on characters and actors more then action yet this and his last film seem to be pieces that demand more visceral action in general. More based on story and plot. That he seems to want to inject with more drama and intimacy. That works, yet not for the best.

There are big name actors all over the place becomes distracting as you figure must be there for a reason and by the end aren’t.

Again, not to many female roles that ask to do more then play wives, girlfriends or victims. Julianne Nicholson tries and does the most with her role and what she is given. Except for a vivid scene in which she is a victim an innocently threatens while mildly molested.

Try putting human side on the character by showing his devotion to child. Just as Edgerton’s character is supposed to be humanized by his domestic life. Though in his case that is also know the depth of his sinking into the syndicate.

The film eventually runs out of steam and not much left