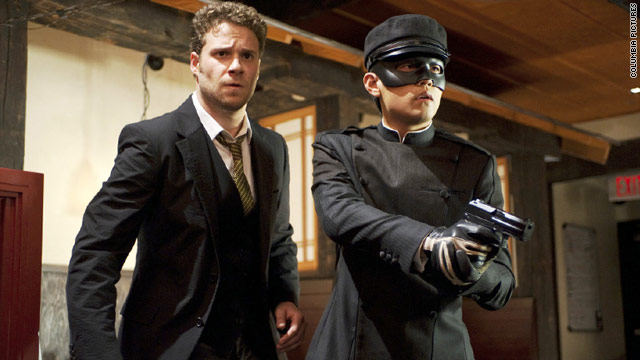 Like most superhero films this one had a long history of almost making it to the screen. Directors such as Kevin Smith had planed on making it with Jake Gyllenhaal in the lead. Eddie Murphy Wanted to make the film in 1992. Over the years stars such as George Clooney (Who Dropped out of this and WILD WILD WEST to star in THE PEACEMAKER), Mark Wahlberg (Who was set to star in the mid nineties with Jason Scott Lee as Kato), Vince Vaughn (Who was set to make it in 1997 With Michel Gondry directing and Jet Li as Kato with a script bu Edward Neumier That included a villain who ate hearts). Then Seth Rogen decided he wanted to play the role and went off with his writing partner to make it a reality with a brand new script. First Stephen Chow (Kung-Fu Hustle) Was set to co-star and direct the film until “Creative Differences reared their head (He wanted Kato to be able to control The Green hornet thanks to a microchip implanted in him. Kato would use a joystick to help him through battles so the green hornet could kick ass thanks to him) Seth Rogen didn’t like the idea. Next James Wan (SAW, AQUAMAN) was Considered before deciding to go with Michel Gondry (THORN IN MY HEART).

The next hurdle was the departure of Nicholas Cage who was set to play the villain only he wanted to play the role with a jamaican accent. the filmmakers decided otherwise. While all these ideas seem awesome they also set a presedent to show that this film wouldn’t be the typical hollywood super hero film.

The film opens promisingly with a funny villain to villain conversation with a great cameo. Which while unusual, sets up the tone of the film. The film goes along after that and plays like a typical Seth Rogen type film only involving superhero’s. The film seeks to satire the previous type of films we have seen while being one at the same time and being funny with impressive action sequences. the film is alive with ideas but plays so bizzare that it never seems to find a actual flow. it is entertaining at times but also baffling.

Why anyone would want to dig up a Superhero who hasn’t been relevant for years beats me. It’s like when the wachowski’s made SPEED RACER maybe it meant something to them in their youth but as far as trying to sell it to a audience it is a hard sell. In fact Rogen and company could have just made there own hero and had the same effect.

The film starts Seth Rogen as Britt Reid. A playboy going nowhere his father tries to guilt him into responsibilty. Then his father dies and Britt seeks to do something with his life. He takes over his father’s business. Is introduced to his father’s chauffeur Kato, Who is a engineer and part time bodyguard. The two of them decide to join forces to find his father’s killer by posing as bad guys to get the killers to come out of hiding and do business with them.

The thing that bothered me is that just like the series Kato does all the fighting and hard work. He is truly the hero. The green hornet gets all the glory, Though he is truly the sidekick. Which Reminds me of one of my favorite films BIG TROUBLE IN LITTLE CHINA. Which did the same type of story only more mystical and with a lot more wit and generally funny comedy. here it just lays there.

Then towards the middle of the film the heroic team has a falling out over a girl and it feels totally false and only there because the dramatic set-up of the script demands it. It doesn’t feel natural or organic.

I didn’t expect much going into the film it was better then i thought it would be but like THE PINEAPPLE EXPRESS i felt majorly disappointed and just wandered why bother making the film.

The film has the energy it just misfired on a lot of levels. Leaving me bored a lot of times in the film. the nice things i can say is that it’s stylish and creative but it is unfocused. The only person who escapes unscathed is Christoph Waltz his scenes are the only ones worth watching as he is hilarious and is obviously having fun. If only he could have been a villain in a better film it would have been worth it.

I wish the film had been a hit as it could have been a partial comeback for Edward Furlong, who has a small role that is hilarious. he reminded me of Danny McBride’s character in PINEAPPLE EXPRESS a minor criminal who keeps getting the short end of the stick even though he has a pretty laid back attitude about the whole criminal thing. I wish he had been in the film more.

I have no idea why Cameron Diaz is in this film other then maybe the film needed star power. She has no chemistry with the leads and looks to old to be any of their love interests. She more looks like there aunt who is trying to look sexy for her age.

Michel Gondry as director was a inspired idea but as usual when he tries to make mainstream films (BE KIND REWIND) he is inventive and makes beautiful looking films that feel artistic, but they don’t make all that much sense which is fine at times, But for a franchise film there has to be some sense and order. At least there must be something that ties all that creativity to something that works out in the film instead of just being there to be there. Unfortunately here there isn’t. I can’t totally blame him he didn’t write this film. He is still one of my favorite and most exciting directors to me, But like Seth Rogen and all involved in this film. I am great fans of but the collaboration strangely didn’t work this time.

I can see people liking this film. it just didn’t work for me. it felt like it needed a few more drafts before it was ready to be filmed. As everything seems here to be more cartoonish and experimental.