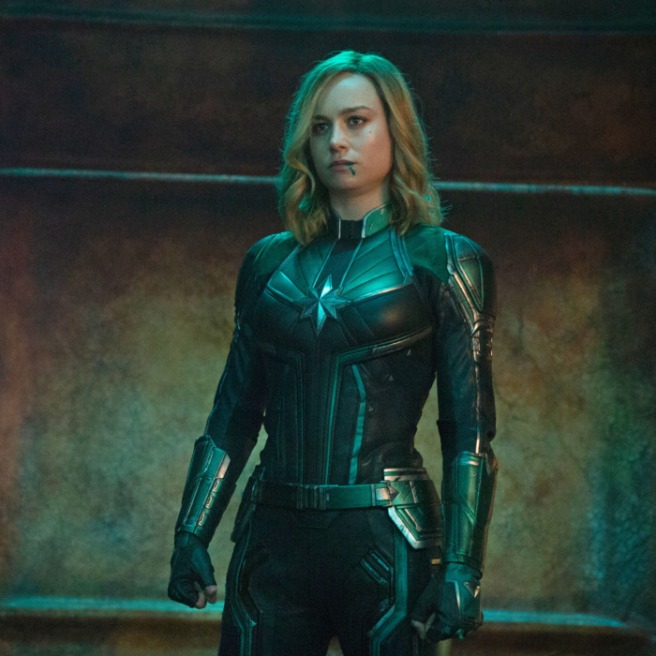 Carol Danvers becomes one of the universe’s most powerful heroes when Earth is caught in the middle of a galactic war between two alien races.

More like a comic book movie where it seems made more for younger kids and girls in particular to give them a hero to call their own to admire and inspire. That gives off a positive message.

The film is Good enough. Though it feels late to a degree. Like it would have been better if it came earlier in the marvel universe of movies. As the effects and story are more fantasy, then the humanistic turn the marvel films have taken as of late. Trying to make the heroes more relatable for the audience.

As a marvel comic book reader in the past. I was aware of the skrull alien race and they were always villains in the comic book. I give the filmmakers props for turning that on it’s head and the audience expecting them to be evil and the villains but they end up actually being more innocent and victims. The Kree being the evil ones though being the more seen as justices which immediately takes the audience to view the situation as similar to the current immigration issues the United States is dealing with and how the president of the untied states is villianizing certain cultures more than others. So there is this more revisionist version.

This film feels Like AQUAMAN feels more silly yet fun. Though it keeps you interested throughout and entertained. Even though you mostly know what is going to happen. As with marvel movies they tend to be fantasy but also deal with the reality of the situations and aren’t afraid to have put some humor in there. Though wisely bit enough to be outlandish or take the audience out of the situations.

Annette Bening charms again throughout the film in an important role. Though At this point you know Jude law is involved you know he is somehow a bag guy. I wish he would get a chance to play a decent character for once. As you are already suspecting him when you see him.

Brie Larson does well in the lead. Samuel L Jackson still seems young and ageless here. Playing a younger version of his Nick Fury character and learn how he lost his eye.

It’s fun to see certain small and supporting players in this movie and remember they played roles in earlier marvel films that help connect this universe and also helps date the action, but also proves again why this might have been better coming earlier. Though understand why it is positioned where it is.

The problem is that we know most of the information that the character of Captain Marvel is searching for, for the most part so when it’s revealed finally it comes as no surprise.

Also the soundtrack it seems every 15 minutes plays a classic 90’s track that get’s annoying fast. It feels like a gimmick to remind the audience of the time period we are in. Though not necessary as the Nine inch nails t-Shirt and 90’s references abound to keep reminding us.

Though it stays a fun ride. It feels somewhat late for some reason.