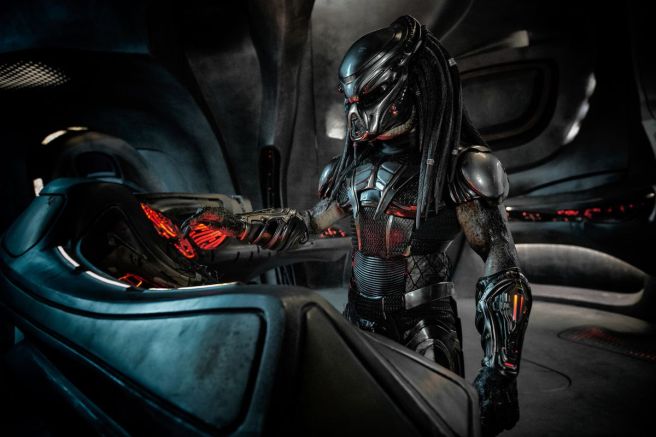 From the outer reaches of space to the small-town streets of suburbia, the hunt comes home. Now, the universe’s most lethal hunters are stronger, smarter and deadlier than ever before, having genetically upgraded themselves with DNA from other species. When a young boy accidentally triggers their return to Earth, only a ragtag crew of ex-soldiers and a disgruntled science teacher can prevent the end of the human race

Not necessarily a remake but more another reboot that works as a sequel that is loosely connected to the other films. Only here other than just facing a predator the heroes are going against a super predator.

The film was originally conceived as a reboot of PREDATOR until Director Shane Black came aboard and confirmed he would be making a sequel instead, as he wanted to continue to explore the “Predator” mythology.

This film has a somewhat interesting premise as the hero encounter tested a predator and stole some of it’s hardware before being caught by the military and since he has knowledge of the predators is sent to a military prison for psychos and metal cases. In Transport they run into the escaped predator and escape. The hero turns his mentally challenged brigade and inspires them to be soldiers again as he tries to protect his autistic son. Who he sent the technology to and has been using.

So the film at times feels like THE DIRTY DOZEN as these somewhat condemned men go on a suicide mission. But learn to have some dignity again and fight for a cause other than Just survival. The teaming up with mentally disturbed people also reminds one of the plot of Director Mario Van Peebles unofficial sequel to his film POSSE, LOS LOCOS (That was also one of director Jean-Marc Valle’s (BIG LITTLE LIES, WILD, THE DALLAS BUYER’S CLUB) first film) As they are a good group of guys and actors. They make their characters likeable and memorable that as in the third act they start to get dispensed like in a horror film. You are sad to see them go and you more feel it emotionally. Even if you knew what was coming. With the requisite dying by each other hands rather than being killed or dying slowly.

This film feels naked in the 80’s as the concept seems so familiar and even with it’s hard boiled dialogue and humorous action sequences. The problem is that you are constantly reminded you are in a movie. As half the dialogue feels movie appropriate rather than natural. Especially when the hero’s wife lists his accomplishments when asked about her husband rather than anything personal or human.

Of course that is what most who come to this movie are expecting, but it’s A film that begs to be over the top but then feels like it pulls back and instead wants to be lien a video game or play to a younger audience and what they might feel is cool. As it takes a pretty liberal view of violence making it the punchline at times. Rather than take it serious but evens it out by it happening to unlikeable characters.

Then we shave Sterling K. Brown usually a dependable actor but his character more a military mercenary type is so over the top and who seems to always chew candy or gum loudly. Though we only get glimpses of him actually being dangerous.

Boyd Holbrook does ok in the heroic sniper role but as a replacement for Benicio del toro something is lost. A she does skew younger but that’s the problem he seems too young to play the role. As the character and his dialogue seem like they should belong to someone older with more experience and swagger. So it feels thin and more movie convenient with him in the role. –The third act of the film is different then it’s original script. As the studio and test audiences disapproved of it. As it was too supposedly talky instead of more action oriented.

Now what should be the movies strength is also it’s Weakness this is a Black &amp; Dekker script. Meaning it was written by the director Shane Black a well know screen writer and his friend Fred Dekker another well known screenwriter they write the film MONSTER SQUAD together and here they are collaborating again. They are both good in their craft especially when it comes to genre films. Here that is the problem As this feels like a spec script first draft or a dream Project that keeps trying to pile on more and more action humor. Which gives it less and less of a home base and feels more and more out there. With very little tension or surprise.

It’s not entirely their fault. This franchise has been going on for a while and keeps getting resurrected in different ways. Even crossing it over with the ALIENS franchise. Not to mention a reboot years ago on the predators planet and training ground. I understand they seem to want to bring it back again each generation but audiences have gotten used to it. So while they come up with new movies they usually are familiar and like any franchise it has it’s fans who keep coming back but unfortunately this series isn’t offering anything too new, but being as how expensive these movies are too make. We keep getting big name talent for unfortunately uninspired big budget sequels. At least the last film before this starring Adrien Brody felt a little different and satisfying.

As the final scene does leave room open for a sequel but it also more makes it look like we will have the advantage so what is there to offer in a sequel? Just a video game with the main character learning to use new hardware that makes him almost invincible.

In the end the film comes off more as a comic book or a teen fan fiction entry than anything that feels like it goes with the rest of the franchise. Which might be perfect for as far and wide this series seems to have gone in tone and stories