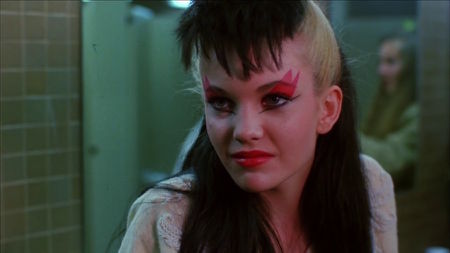 The media and disaffected teens mistake the acerbic rants of an obnoxious teenage punk rocker as a rallying cry for the women of America, launching her and her talentless group to national stardom.

I have been waiting to see this movie ever since they showed a making of on the rainbow man DVD it was the first time I had even heard of this movie and I was way into movies then too plus it had some of my favorite actresses and subject 80’s teen movies. I wanted to see it immediately and wondered why it had never been apart of my many movie guides. Apparently it barely got released to theaters and only after being held back for two years. Then it only played on cable late night not really ever being released on home video. There were plenty of bootlegs of the movie taped off of cable that made the rounds until a few years ago where a big petition went around for a demand for the film to be released on Dvd I mean come on they released Nothing but trouble on DVD and who was really demanding that. So now it has finally been released now I have a DVD bootleg version from cable and the dvd version. So here is what I thought.

With it’s Rebellious spirit that speaks exclusively to the outsiders among us the film is also a realistic but clever satire that helps make some of the few ridiculous elements of this film forgivable but I have to give props to the filmmakers for making this film that is aimed at teenagers so bleak down and dirty realistic and kind of depressing.

This film about the very quick rise & Fall of a all girl band is fascinating as a time capsule of the 80’s and it’s culture but it works as a girl power theme and a film for the outsiders in society.

It’s fun seeing a young svelte Ray Winstone who is actually not bad as the lead singer of a group that is supported by Steve Jones and Paul Cook of the sex pistols and paul simonon of the clash. He is quite the young heartthrob ripping through this role with a lot of anger and a bit of charm. Diane lane showed here that she had what it took to go from child actress to adult star and to be taken seriously. It’s interesting that Jodie foster turned this down as at the time this is the type of roles she would normally get and in fact this movie makes a great double feature with “Foxes” I had to see the film laura dern got legally emancipated form her mother to make.

The soundtrack is actually pretty good not great but good.

Directed by Lou Adler of Cheech &amp; Chong fame this fits his status though a bit more realistic then his previous work. The film is freewheeling but keeps it’s status small.

The sad part is realizing for all the faults the cinema of the 1980’s had there were a lot of original ideas of films that were made as experiments just to make money or cater to certain market that are like lost classics that almost no studios today would ever take a chance on even with all this supposed outside financers trying to get into the movie business. Sure we have our independent films that seem revolutionary but they are so out of leftfield they call attention to themselves immediately making sure there are very few cult classics these days there are no films that play by the rules but are subversive so that if you really study it you realize this is really different while still playing by current mainstream cinema rules. I’ll admit there was a lot of crap in the 80’s but then sometimes you’ll come across a movie like this “Carny” or “Scarecrows”

Though the ending is obviously tacked on to make a less open-ended finale in other words selling out a little to show the success of the group if you look closely all the ladies look older noticeably older. The success they found and that they didn’t have to hide behind the façade they could still do there music and be themselves.

Though I would have liked the original ending it sort of gave me the idea that even though they were a overnight hit then fell at least they inspired other girls to try to make music with there own ideas feelings that may go against the norm sort of like what this film did it’s not hard to see that maybe some of the current female rockers found inspiration from this film.

I also like that it shows how fickle an audience can be loving you one minute and ripping you part the next they swear they are like you and believe in what you say then one person criticizes you and they turn against you. It’s not right in the movies case it is. It also shows how untrustworthy the media can be you are there darling one second the next they are doing editorials against you and the evil you spread. How fame can create a monster and the people out there supposed to protect you are only interested until you stop making them money.

The film is also surprising for being a coming of age tale, where the film is one of empowerment but also showing the pitfalls and ugliness of the record business at the time and the characters in it. It is also one that actually focuses on girls not as sexual objects but as real characters who aren’t perfect and are learning along the way instead of being ideal or troubled on their way to being perfect

It’s definitely a must see