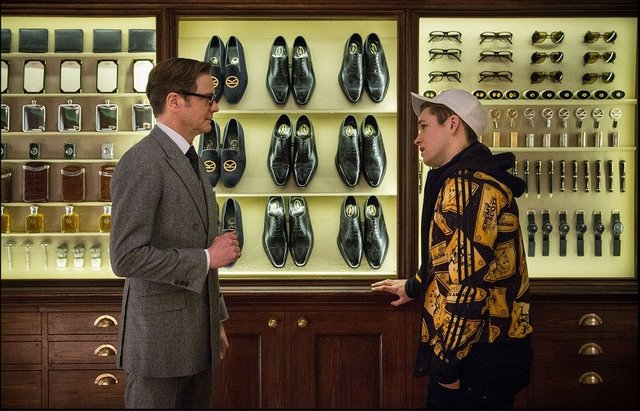 Agent Harry “Galahad” Hart from the Kingsman Secret Service helps troublemaker Gary “Eggsy” Unwin, who is the son of an Agent that saved the lives of Harry and his team, sacrificing himself seventeen years ago. Harry invites Eggsy to be a candidate to the vacancy of a new Agent in the agency, and he is trained by Agent Merlin and competes with other candidates. Meanwhile, the Kingsmen investigate the industrialist Valentine, an insane genius of technology who is plotting a deadly plan with his assistant Gazelle to save the Earth from global warming, eliminating most of the population with a chip and saving only those that he has chosen.

At heart this film is appealing as a male wish fulfillment fantasy. Being plucked and trained to become a secret super spy with your hands on riches and teaching you how to be a proper gentleman. Though it comes to a rollicking start and only slows down a bit to get a full picture of the scenery and characters.

What makes the film so rich is that the film scream it acknowledges it’s predecessors white a wink and gives them credit while also bathing in the hallmarks of previous films in it’s genre. Spy movies for this one. Though it also manages to create it’s own identity by climbing out of the shadows of it’s forefathers while staying down what faithful to them. Like a true legacy.

This film is just plain and simple fun, and continuously energetic. It feels like a breath of fresh air as it continues to rack up more unbelievable cartoonish big action sequences and situations. That provides the audience with a feeling not to take any of it too seriously. As the film tends to settle into an anarchy filled mood that will definitely make the audience as well as fanboys drool in not only anticipation but in overblown action.

It is not surprising that the film is based on a graphic novel and that one of the masterminds behind it is mark millar creator of the graphic novels that helped to make director Matthew Vaughn’s previous film with screenwriter Jane Goldman KICK-ASS. Though I enjoyed that film. This one feels more enjoyable as it doesn’t have a serious themes and mainly involves adults. Now I am familiar with Millar’s work and while a fan of it. I recognize it is not for everyone and while usually with a sense of humor and ultraviolence can be distasteful and insulting to some. Though out of the films made from his work. This is surprisingly the least offensive of them. the film tends to mine the same territory of his previous work but manages to feel different yet belongs in the same world.

Director Matthew Vaughn continues to be a not only solid director, but chooses his material well and shows a true passion and eye to bringing out what might have attracted him to the material in the first place and trying to have the audience see and feel the same way as he expresses it through the film. –The film reaches a true turning point in one particular breathtaking scene set inside a church where it starts civil and turns into an orgy of action. That whole over the top is an amazing feat and after that scene the film truly blinds to express more violence that before that scene had been hinted at or suggested other then the occasional hand to hand combat fight.

The film is violent up until then But like the manner of the character plays out more reserved and cartoonish over the top like th e film and situations only rarely coming to a more recognizable reality. It always feels like a movie but it feels like early I. The film it is holding back to show you the glory later when it becomes no holds barred and giving the audience more of what it wants.

Colin firth is devilishly good here as to me he has always seemed perfectly cast as the more buttoned up gentleman. Here he plays his first noteworthy role since A SINGLE MAN. As here the film plays up to the strengths we know him for and then adrenalized him by then turning into an action hero who is a virtual killing machine if prompted and it’s nice to see him that way. As knowing it will most likely be rare. He asked like most of the cast seems like he is having fun as the film rolls along. He is certainly also the last you would expect to be playing an action hero.

Samuel L. Jackson plays his part to the hilt as the megalomaniacal super villain with many tests and quirks a constant lisp that I wish was more played up for the comedic circumstances. His villain also happens to be sickened by the sight of blood. Which as a villain leads to many hilarious scenes displaying his evil, but not being able to stomach the aftermath. With oh does make him a rather threatening yet wimpy villain whose ideas are bigger then he can stomach as far as success. He also has a ridiculously loud hip-hopish wardrobe better suited for a teenager or man in his 20’s. As he looks particularly clownish trying to pass as hip with a constantly crooked cap to the side. That only helps pay off his character more and more.

Mark Strong is also in the film in a more supporting role. He is an actor I love high at times in my reviews I might seem to more make fun of him. It is just because he seems to be the i to guy in big budget films. Usually as the villain or the right hand man to the villain and also usually wears a wig that more or less informs the character he plays and seems that he acts more with the wig at times. Here he is actually in the home good side and manages to be noteworthy even in a smaller role. To me he is like the British new generation version of Gene Hackman. His serious face makes you feel off guard when he has more comedic scenes.

Also noteworthy is Sophia Boutella this is the first time I have seen her in a film and I am certain it won’t be the last. Not only does she take you off guard with her beauty, but the dangerous assassin she plays is a sight to behold with her legs as weapons literally. As her character is a double amputee with knives literally as her feet. She is a sight to behold especially in action scenes that look strenuous yet makes it all seem effortless. She is one to keep an eye on.

Strangely most of the film stays away from sex. Until the last scenes where nothing is truly shown but more suggested and if it was more in a conventional way it was presented. It would be fine but the manner in which it is, is keeping with the over the top and gratuitous manner of the film, but truly feels like the only time the film might be more crass then throughout the preceedings. Though it is shocking. Especially in a film full of intended ones.

While some might see the film as fun disposable popcorn entertainment. It feels more like a truly noteworthy action film. That yes feels more like a movie then anything realistic and that is part of it’s charm as our hero here isn’t an anti-hero and the film never feels downtrodden. It is very english In it’s sensibilities but leaves a story even Americans can see themselves in.

Definitely one to add to the film library and see in the theaters if you can.