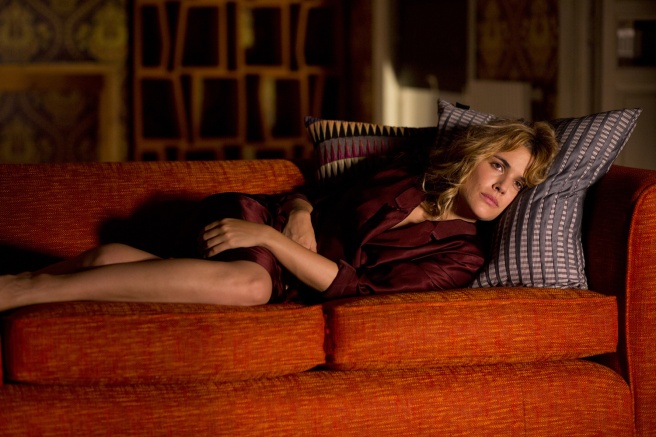 After a casual encounter, a brokenhearted woman decides to confront her life and the most important events about her stranded daughter.

As usual fitting into Pedro Almodovar’s canon of films. This film Is more on the melodramatic side. Though the way the score works and as directed comes across more like an emotional thriller.

In the third act through there is an ending. He films seems to just abruptly end. There doesn’t necessarily feel like there is any closure and so many mysteries just lie there. That it feels I satisfying to a degree. I am all for endings where it is left ambiguous, but after all the audience and character has gone through it feels like they deserve more.

After all the film goes out of it’s way to fill out all the other details. Such as the logistics of relationships, scenery, locations. Even though this is one of the more smaller scale films of Almodovar’s career.

The film is vivid but also feels claustrophobic. As to the closeness and stillness of the characters as well as the close quartered interiors that the scenes mostly take place in.

It might be as at times an influence over the material can be where Almodovar got the films idea from. Here this seems to be less like his first films more reserved and inspired from literary works. Though coming back to female drama type movies. So that might be why the film isn’t as colorful and alive as past films and more deals with inner turmoil and emotions. Hence why so many scenes are indoors. Never letting things go or out. So that they always summer below the surface. In this film they never seem to escape you never get those scenes of release and relief.

So the performances of Adrian Ugarte as young Julieta and Daniel Grau as Xoan are standouts on their own. They feel familiar but as stand in for youthful passion. As Xoan seems more the spiritual Anne Julieta is more the intellectual letting herself go. Seemingly set in the 80’s her fashion seems on point and still fashionable for today’s time even if quite funky (in a good way)

Rosy De Palma Is back and almost unrecognizable in her supporting role that adds age and wisdom to her portrayal of a ital character. Who gives subtle clues to certain mysteries

While this film certainly fits In With the others. It is one that also shows the most restraint as it feels softer and gentler. Yet it lacks a certain rebellious artistic danger that Almodovar brings to his films. I can understand maybe he is trying something different and don’t this on purpose to show a versatility. It just feels strange if you are used to his usual.

The original screenplay was written in English and Meryl Streep had been approached to play the lead, but when Pedro and Agustín Almodóvar went scouting to Canada, the director felt insecure to shoot in a place he didn’t really know, in a language he didn’t master and with a story he felt worked better at Spain.

The film is still unmistakably his and totally his style. Though feels a bit more influenced like VOLVER which at least was colorful and full of spirit. This seems influence by Bergman only still moves along faster and not as torturous on the characters.

The film seems to be more questionable about what it is exactly about. By the end you wonder what this was all for what was the point other than a more artistic endeavor emotional workshop challenge to a degree.

It’s not a bad film. It is still better than a bunch of films. It just feels like it falls a little short from what we are used to from the director. Though there is something to admire about the film.