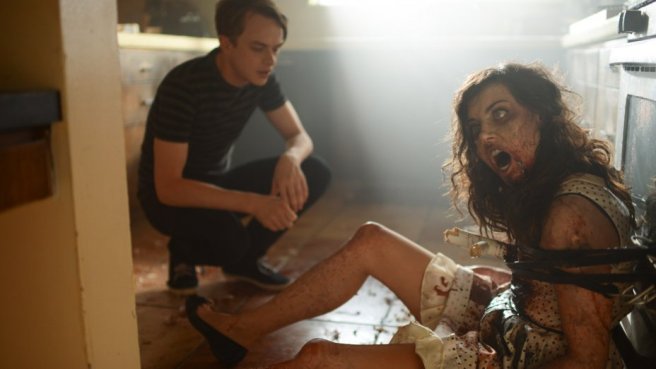 A hike alone in the woods ends tragically for Beth Slocum with a fatal snake bite. Her death leaves her parents and boyfriend Zach reeling. After the funeral, Zach tries to make friends with Mr. and Mrs. Slocum, but even they reject him, and he’s determined to figure out why. Then he sees Beth. Her parents are trying to keep her resurrection a secret, but zombie Beth provides Zach with the opportunity to do everything with her that he didn’t get to do while she was still alive. But with Beth’s increasingly erratic behavior and even more strange occurrences around town, life with the undead Beth proves to be particularly complicated for her still-living loved ones.

Similarly like the recent TUSK. This film has an excellent premise it is full of ideas and moves forward using them sometimes, but it also seems to drop the ball alot of times also.

It also seems to start some and then just leave them having without any resolution to them.

It also in the third act seems like the film is going to go off the deep end to totally dark as opposed to at that point darkly comedic. That marks a tonal change, but that I was really going to applaud for going for a more realistic approach and being not afraid to unsettle and surprise the audience until it turns it around and reveals that it decided to stay safe in the guidelines. I can’t tell the filmmakers how to reach their vision. I will just say it felt like a cop out to a degree.

While I found this film better then the similar FIDO of a few years earlier. That film was more satirical and was more inspired by the 1950’s Milieu of horror. This went straight for dark comedy with some horror elements in it. It also reminds me of a curiosity from the 90’s named ED AND HIS DEAD MOTHER. Starring Steve Buscemi. Not necessarily exactly the same plot, but it matches the film in tone.

The story is good. It’s just that since we are Introduced to the characters and situations late in their development. We never know why the characters were like before this incident happened to notice any difference or strangeness. Especially when informed that they were on the verge of breaking up, but never given a full reason.

It starts off slow and slowly starts to pick up steam and once it is full charges it starts to go off the tracks. Though stays steady until the end.

What works is that the film never overreaches it stays in it’s lane never all of a sudden becoming just a zombie movie or a horror film or just a comedy. It flirts but stays with it’s own identity. That never really excites. It just seems to stay sedate.

The actors are all game and Dale DeHann gets a chance to flex his comedic muscles. In his first on-screen intentional comedy. He gets to use his worried looks to sell his characters desperation. Though he never quite sells his character and situation he does good enough. He feels like a bland character only for us in the audience to project ourselves Into, as like what would we do. In the same situation type of characterization.

Aubrey Plaza is perfectly cast. Though known for her sarcastic, cynical and dead-pan humor and roles it is a bit disarming to see her at first play sweet and nice. Before the other side of her character comes completely out. And she plays more to the strengths we know of her. She is a versatile actress as witnessed in the various roles she has played in different

In the end the film comes off like it has no heart. Like it’s a project of no ideas a theory that wants to be explored and put on screen, but no voice or anything to say. No passion inherent. Which is rather odd as the director has written other scripts and his first time up to bat to direct his own screenplay and it seems like more of a project then a original voice. Sort of like covering a popular son by sampling rather then try one yourself with your own lyrics and voice. It doesn’t feel as fresh as it should even with the nice packaging.