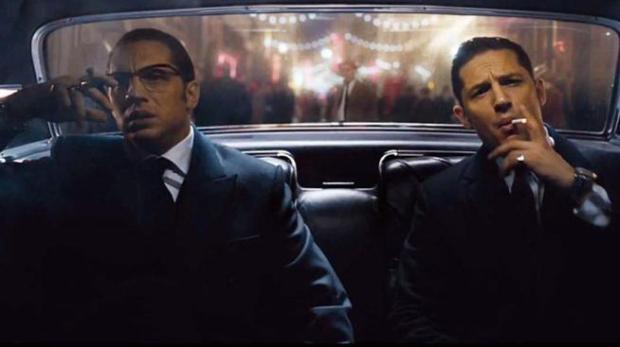 Written & Directed By: Brian Helgeland
Based On The Book By: John Pearson
Cinematography By: Dick Pope
Editor: Peter McNulty

The film tells the story of the identical twin gangsters Reggie and Ronnie Kray, two of the most notorious criminals in British history, and their organised crime empire in the East End of London during the 1960s.

Not the best, not the worst gangster film. Though it seems more like an acting exercise for to hardy then anything else.

One character is more the debonair, charming, heartthrob tough guy. The other more simple on the surface. Yet insane and unpredictable that he seems to take in as a challenge and enjoy as it seems more showy. Yet truly tries to make him more well rounded and not a caricature. Especially as the story is based on real people. Either way he is good I only wish his performance and energy Inspire Ronald physically though has the natural swagger of Reggie. Who he actually seems more to resemble especially in pictures. I only wish the film matched him.

Emily Browning is mesmerizing in her role, She is quite the vision. Equal parts charming, vulnerable and a quiet strength. though I have to admit more for her looks then what the film offers her in more a celebrated thankless role.

The film offers an intriguing narrative. While keeping the details of the story close to the facts. It cones across more as a love story. As Hardy’s character has to choose between his toe great loves and once he does it proves to be his downfall and once his choice chooses to abandon him. He is only left with the grief and pain as there is no one there to help ease him through. So all he has left is pain and anger at himself and others that seems to pent up and to be released. Though one can argue that he is battling his other side and the one other person he can truly love and love him without fear.

The film feels like it should have a more epic scope, but in choosing to be more of a character piece. It also seems to make the story small and more made up of where the brothers came from. You see part of their success. Though not as much glitz, Glamour and influence that one would come to expect from a tale of this type.

The ending is really effective as you can’t believe how sloppy a character becomes. The reasoning is seen more out of distress and emotional hurt. I believe it comes more as a shock. As sure these guys are violent gangsters, but plays more the role of club owner or casino owner and from other mob films, they have always been played as men with dangerous connections and of great influence.

Who have those around them do dirty, but also make sure to stay spotless themselves always looking, studying and knowing the angles. So the ending is shocking and expressive with that action.

Despite being very open about his sexuality in this film in real life Ronnie Kray kept it very private as he saw it as a weakness which could be exploited.

As we can accept when his brother does it earlier, but with him it is almost like a betrayal to himself and like he does the same thing to us.