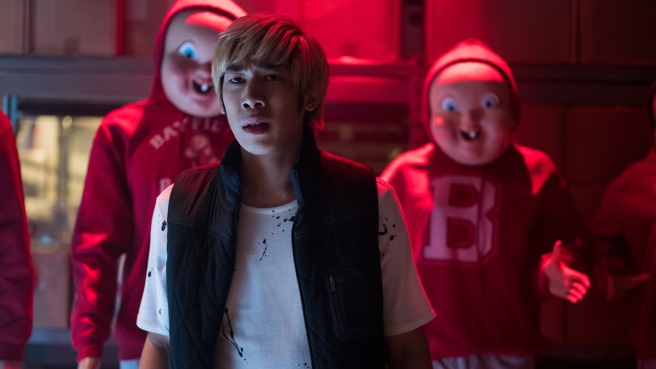 Having survived the farcical but utterly life-threatening events in the first film, the feisty sorority sister, Tree Gelbman, finds herself in the same college dorm, thankful to be alive. However, this time, it’s Carter’s roommate, Ryan, who claims that he is reliving the same paradoxical day over and over again, as a mysterious paranoid killer in a single-toothed baby-faced mask with a big kitchen knife has made a habit of murdering him. Under those circumstances, a valiant but vain attempt to face the challenge, once more, will send Tree back to square one, trapped in an all too familiar and blood-drenched time loop. How many deaths separate Tree from a truly happy birthday?

The film is quick to explain what happened in the first film. Killing the first films mystery and momentum a little by explanation spoiling the initial premise. Which was actually one of the more original aspects of the film. Here the idea is expanded upon making it a bit confusion and complex but also moves it into another kind of genre while keeping it’s Original personality.

This film could have easily been a case of tag where the situation is repeated and passed on to another character. Which is what it seems like here at first. As it seems like her boyfriends roommate the next day will carry on the tradition and It’s exciting to think an genre American film has given us a male Asian lead but the film finds a way to put him back in an important but more supporting role. Giving the lead back to blonde Caucasian actress Jessica Rothe the original star though this film gives the film a chance to expand on her character as well as others.

Her character long suffering forever a martyr tries to get deeper rather then stay with The films initial spirit trying to show depth of that it is more than a simple label Or title. Which makes it better overall if trying to achieve an everlasting quality it messes with what it was built upon and what the audience came for and probably expected.

Like a sequel it is bigger and makes one appreciate the series more with each film. Though it becomes rather obvious by the middle of the film who the killer is but by now it has moves past that to different expectations. Though the film still tries to throw in some surprises and stay with It’s Original spirit

The film is more glossy and still feels more studio specific and that it and the audience know where it it going but still wants to have fun and you around keeping the viewer On their toes. The film still had more of a sense of humor while getting crazier though luckily expanding the universe and bringing it closer to another genre.

The film is still more commercial comedy that happens to have some horror elements in it. That starts to veer towards sci-fi.

The film is inventive where it finds a way to relive the first film all over only with more details while making room for It’s own identity with the sequel. So that it manages to borrow the plot of another film (BACK TO THE FUTURE) as well as THE BUTTERFLY EFFECT just as the first film used GROUNDHOG’S DAY. While continuing the storyline and expanding the films universe.

This film is more enjoyable as it throws you off and has It’s own rules. Where as the first film has a fun initial mystery but played familiar even while being inventive itself. This film feels more like TERMINATOR 2 Bigger, expanded and more loaded. Essentially you can’t take anything seriously it for granted. Even though it has sections of tones all over the place.

At times the film lags it drags. As it soon runs out of steam and is easily figured out at some points.

One can give the film points for enriching rather than simply repeating sillier ending. This film is likable ever growing goofy at times and recontextualizes more intriguing same story told in a different way. It actually wins you over if already skeptical and leaves itself open to be a more favorable film franchise without embarrassing itself or seeming more like a cash grab