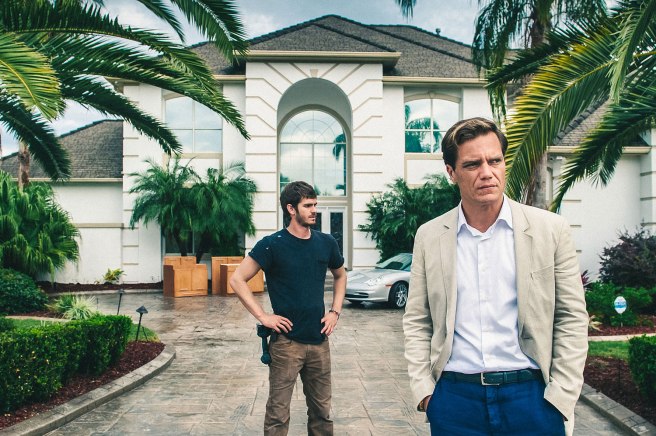 A recently unemployed single father struggles to get back his foreclosed home by working for the real estate broker who is the source of his frustration. The film is based on a real life father who exposed a corrupted real estate agent.

This film focuses on the financial crisis in America. The film is set in Florida. Where there are plenty of McMansions to go around, but a housing crisis as more and more loans are being sold to private collectors. Who are in turn not letting the homeowners try to pay off before evicting the tenants and selling the houses on the open markets.

The film is a heartbreaker. Truly a tragedy as you watch it. Though this is common of films by Ramin Bahrini. Who tends to make movies that are slices of life about characters and usually communities. On the lower end socially and financially and the problems they face. Filament like CHOP SHOP, MAN PUSH CART, AT ANY PRICE, was his last and that one was more actor friendly as his first films usually had non-actors in the main roles. To sell the realism more. Here he is working with Michael Shannon and Andrew Garfield.

This is more Michael Shannon’s movie as his character reins over the film. You never forget him as he seems Like a villain but explains the way he see’s the world and justifies what he does. Like a hitman it is never personal and he always seems to manage to keep a cool detached head about the whole operation of evicting the tenants physically. Showing no emotion. He is like a modern representation of greed and selling out.

Where as out conflicted protagonist played by Andrew Garfield is one of those people displaced who by chance impressed Shannon’s character enough to hire him and slowly become his protégé. We watch as he seems to sell his soul little by little to gain a living and keep his family with a roof over their heads and also slowly selling out himself. He soon finds himself becoming almost a robot and being just as cruel and detached. Though he has pangs of guilt that slow start to seep in.

Andrew Garfield does what is required of the role, but pales in comparison to Michael Shannon’s role whose role is much more exciting and more well Written. He plays it with layers and nuance. Whereas Garfield as the moral center of the film at times comes off too bland. Don’t know if it was written that way to make him more identifiable.

The film never quite raises to the heights that it seems to be headed in. There are plenty of tense scenes throughout that crackle with emotions and drama. Especially the confrontational scenes between homeowners and the bank representatives. Most of which are heartbreaking. Especially the minor scene of kicking the senior citizen out who has no place to go.

The most harrowing scenes are the evictions and as they play out. They are their own little horror scenes in of themselves.

The film has one particular tenants story keep getting revisited and building. At first not as obvious, seeming like just another case. Then it slowly stitches them Into the main story. Until they are a major supporting character by the end. Especially as they family and character seems to represent the good side and what could have happened under better circumstances. Even if Garfield’s character seems more forced into his role out of necessity. The other characters are never going to be able to look at it from his side.

In the beginning of the film Dennis and Frank’s little boys comment on how Australia looks like the USA upside down. A large theme of the film is reverse. The reversal of Dennis’s role from evicted to evictee, and also on how the American moral system is completely upside down

The story does resort to a Good Vs Evil parable by the end. Judging where the morals lie. It simplifies the situation. Thankfully because if it went through all the implications. It would weigh the movie down with details it wouldn’t need.

Though as the film ends we are not certain of the future, but it leaves with a more positive outlook then it begins with. While it takes a look at a social issue in minutiae. Something that was happening more in great abundance in 2008. Where it seemed to be more of a epidemic. It still is going on unfortunately.

This overall is a morality tale as we have Michael Shannon’s character who is morally bankrupt not only in business but in life also. Who makes a Faustian deal, as he notices one of the people he puts out is actually quite handy and needs money. Which seems to be his answer for everything throwing money and making backhanded deals. Michael Shannon sells this roles to the heavens. Andrew Garfield has the more challenging role as he at first is against it but needs to survive in anyway he can. Soon though he finds himself becoming just as morally bankrupt as his boss. Which really doesn’t hit home until really it shows up at his door. What he is helping cause. Soon he has trouble loving with himself. As at first he was only doing it to save his house now he realizes he might have indeed sold his soul. As the people are just like him, the only difference was opportunity.

Though the film also gives us a good argument from Michael Shannon’s point of view as we can see how he ticks. No matter how shallow his reasoning.

The film isn’t hammer you on the head powerful. It is more subtle. As it more stays with you afterwards. It haunts you and really puts the question to you. As to how would you react.

It would make a great double feature with THE BIG SHORT. Not as funny, but where as that movie spotlighted the movers and the shakers and made you constantly question. Are these the heroes? Certainly the most idealized versions of them, this film takes a closer look at the human side of the fallout. Sure a microcosm of sorts

I can’t say the film is enjoyable but it is gripping throughout and definitely worth watching.