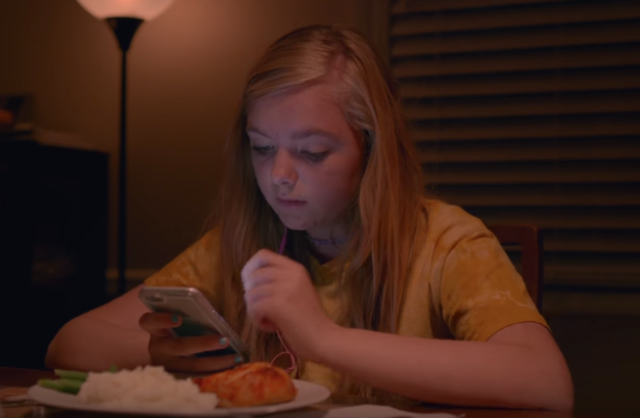 An introverted teenage girl tries to survive the last week of her disastrous eighth grade year before leaving to start high school.

This is one of the most pure and natural films of the year.

We all grow up differently and have tales and experiences that are unique to our growth and development. So you can always claim when it comes to certain Coming of age tales that you can’t exactly identify with it as far as individuality and community, but most tales have emotions or feelings of Alienation and loneliness that most can feel a familiarity with. Even if just in moments and not for extended periods of time.

This could almost count as a horror film itself with so much emotion and tension in almost all of the scenes. As there is emotional torture through awkwardness throughout.

The film is like the classic (in my eyes) WELCOME TO THE DOLLHOUSE. Only less comedic and not as bleak and downtrodden. As this more seems to take a look at a representative of this current generation.

The girl’s well meaning father played by Josh Hamilton, who feels just as helpless as her when it comes to bonding with her. Though he tries to always be encouraging. That you can tell he is trying to do his best. Not matter how embarrassing or how much she puts him down.

The rest of the parents and adults in the movie are there but seem almost alone to their kids. As they never quite understand or are not he same wave length.

She puts out YouTube videos where she seems like an expert on advice and self esteem. From best experiences but usually when we observe her In life it is the opposite. Showing this generations and mosts double identity where you can be whoever or whatever you want online as you are kind of anonymous and can create an identity. Then in real life where you can’t escape and have to come face to face with your reality and sometimes limitations. As she constantly is online knowing what to say or best things to do, but never seems to follow her own advice. Even though her channel is barely watched.

You can tell Elsie fisher is more of a first time actor in her delivery, motions and actions. As she seems more natural and not polished, stylized and poised.

Situations and themes that are introduced aren’t necessarily resolved or explored past a certain point. So for some the film might seem a bit random.

The film really comes alive in scenes where the slightly older teenagers talk and she seems to finally find someone who likes her.

Which then leads to a scene where after seemingly finding some peace and happiness with an older friend and her friends. One of them tries to molest her. Where the situation is unpredictable we feel just as scared and disgusted as she does. As the male see’s nothing wrong and believes himself to be helping her where as he seems to be embarrassed and acting out against previous rejection and seeks power and acceptance in the situation. It also feels like another moment of just when she can feel good and unguarded this happens.

This also brings up the fact that the characters are going through puberty. Where sex seems to be coming up around them more. The film approaches the subject but it doesn’t become a major thing. As just for these characters it is a new and kind of scary thing that seems built up and will happen, but this unknown is still able to be put at a certain distance and only pops up occasionally to remind them of it’s presence.

Like a horror film the film even has the final girl moments are when she finally speaks up for herself and finally seems to get a friend who is just as awkward as her.

The film isn’t as hard hitting or depressing as other coming of age films that seek to capture the feeling of youth. There is no big tragedy other then the everyday. No saintly moments.

Director Bo Burnham said he originally intended for all the young characters to communicate with one another over Facebook. When his star, Elsie Fisher, saw his script, however, she said, “No one uses Facebook.” He then made that a line in the movie and had the characters use Instagram and Snapchat instead.

The film never feel artificial or like a product. Yet it is it’s own horror film.