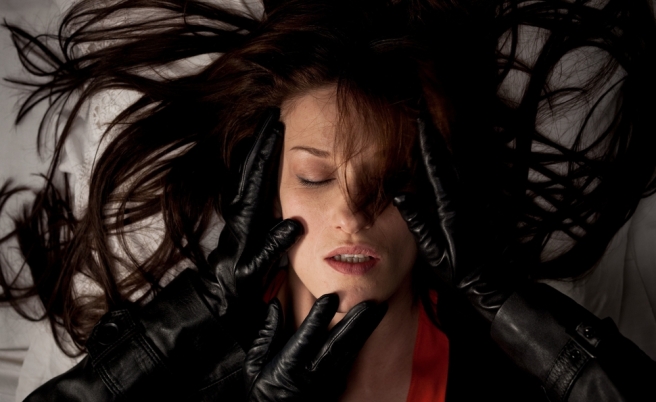 Following the disappearance of his wife, a man finds himself on a dark and twisted trail of discovery through the labyrinthine halls of his apartment building. Led on a wild goose chase by cryptic messages from his mysterious neighbours, he becomes entangled in a hellish nightmare as he unlocks their strange fantasies of sensuality and bloodshed.

The Strange Colour Of Your Body’s Tears is a visually dazzling experience from the creators of AMER that takes you on a journey into mystery and blood soaked terror that you will never forget.

Excellent title that sounds vivid like most of the images in this film. Where the film runs into trouble is that it is hard to follow or make sense out of most of the film.

It’s like a David Lynch movie, but even more out there as lynch films are usually somewhat able to follow, even when being unconventional. Here we know that this film is an homage to classic giallo films and in turn revolves around a mystery. Though at first we think we understand the basics with a little style as the film goes on it raises more questions than it answers. So now there are numerous mysteries gathering that you in the audience are trying to figure out. It is fun trying to play detective that makes the film feel almost interactive and the more people you watch it with the better as you all try to have your own interpretation.

Though after some time you just give up and just experience the film and where it takes you. That is how you will get the most out of it. If you try for something else, it will probably lead to frustration. It’s not so much a film or a mystery but more of a piece of art. That you observe and admire and can come up with your own theories and interpretation as to meaning. Which is what I believe the directors set out to do.

This is a film to watch not for an escape, but to accept a challenge.

The film is full of sumptuous visuals. That if you can make it through the film is very rewarding, but I can admit how frustrating this film might be for some audience members and how it might not be their particular cup of tea.

Though while watching the film the visuals and angles begin to take on not only a fetishistic quality that soon becomes the norm. As the filmmakers find beauty not only in the mystery of the spaces and apartments the film takes place in but various characters bodies. Exploring them, inch by inch revealing the curvature and tenderness of them. Which then also exposes secrets and psyches of characters we supposedly know.

I can say I enjoyed this film a bit more than their previous film AMER which was just as strange but a little more conventional and easier to follow. I believe that film prepared me for this one.

Is this a good film? I can’t really say, As I believe the directors achieved what they set out to do. So in that way it is a success. It’s a mystery that no one can easily figure out, but it does have a beginning and an end. That middle is quite a ride.

By the end all you can think about is what these filmmakers could do with a more conventional narrative. Though then again maybe the non-linear fashion of their films is what allows them to be so abstract and surreal.