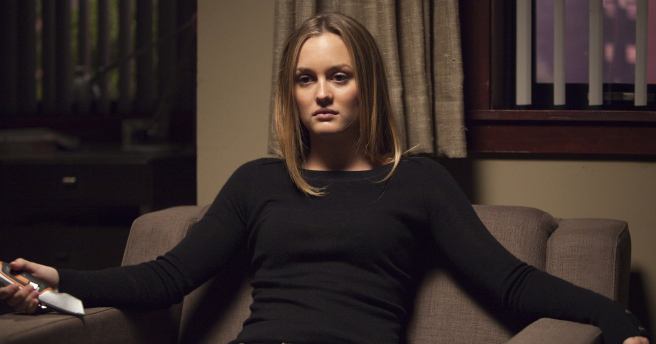 Fresh from Des Moines, Iowa, Sara Matthews has just landed in Los Angeles as a college freshman studying fashion design. She meets handsome Stephen, party-lover Tracy, and roommate Rebecca. Rebecca is nice, sweet and ready to share everything with Sara. It could be the beginning of a beautiful friendship. But Tracy is convinced that there’s something seriously wrong with Rebecca and bad things start happening to everyone close to Sara. If Sara is to have a normal college experience, she’s going to have to get to the bottom of what’s up with Rebecca and quickly get out of her clutches.

The film has quite a few attractive actresses. That was what kept my attention as there is nothing else really of note unless you count the bad qualities of the film, but after awhile you lose count so you need something to fall back on to get you through until the end. It’s not even good as camp. Though I am sure someone will try to make it.

It’s my own fault I should know what I am getting into when Most of the cast are on WB Teen Shows at the time and almost everyone is model beautiful in this film.

The Director always seems to film the actresses it seems in the dark and manages to never make them very enticing.

While certain rules apply to this film if it takes a bunch of writers to write something this simple. It’s usually horrible as so many ideas got either cut or simplified or so many just want to go with the flow and not improve it too much. Probably just to get a paycheck. Also if Cam Gigandet is in the film 9 times out of 10 it will be bad if he has a major role. He’s the Ted McGinely of films

There is no character development everyone is a Character type, instead of a character.

A character is introduced from the villains past who she apparently must have stalked, but other than a confrontation we never get any insight into what happened. So it feels like a wasted opportunity. Even if the point was to show a past for her behavior. Which doesn’t come as a surprise even to the lead.

There is a certain point where there is a avant-garde shot used for no reason it doesn’t define or reflect a mood in the film, or scene. It’s there to look cool ad that is the problem. The film is all surface and no depth. It’s bad enough the film is a college set teen rip off of the superior thriller SINGLE WHITE FEMALE That lacks bite, but there is no enthusiasm to the whole endeavor. Everyone seems to be in a dour mood as the lighting.

Judging this film not like other films is what it seeks to do. Which isn’t exactly fair, but isn’t unecessearilly uncalled for either. Where as most of is make up some rules for some films that we know not to compare to others or we put blinders on as we go purely for entertainment not necessarily the composition or craft of filmmaking. Though at times it comes off as favoritism and I can’t deny that I have shown it to other films in the past. This one I try to but

You can’t even appreciate this film on a lower camp level as it is inept even a trying to get off on cheap thrills.

Even the sense at the unrealistic elements that could have been used to make this at least a trashy guilty pleasure and distract from it’s disappointing nature are bitter under utilized or not used at all.

There is an obvious girl on girl undercurrent of eroticism going on that the film spell out by having a girl on girl kissing scene. Not make-out but kiss scene. That is flirtatious that’s all and implied nudity than actual nudes and a pretty tame sex scene. All of these things could have been explored, but aren’t to make a PG-13 teen thriller that would even bore teenagers.

Kind of like at times when they make a black remake version of a film. Instead of letting the original be universal. Now it’s just playing Into a niche market.

This is a royal screw-up really as it has quite a few attractive elements though is not at all enticing. nor does it make any of the actresses enticing. The film doesn’t even explain or show why Leighton Meester’s Character would become so obsessed so quickly.

It takes Sara one hour into the film to realize that Rebecca is psychotic.

This film and the film EASY A show how much of a bombshell Aly Michalka has become even though she only plays supporting roles. She looks the most age appropriate of the film.

The film feels like a 1950’s film against homosexuality also as the stalker is clearly or allude to as a lesbian. So her character is all of a sudden a schizophrenic and delusional rather than be the later and just so happens to be the former. As she tries to seduce her crush all these people try to convince her she is crazy fearing she will try to turn you.

Teen films were targeted at the actual audience. Now a days what teens are the films supposed to Represent. They are so Scatter-shot and filled to please every demographic. It ends up representing no one that is why they are easily forgotten. Not all mind you that is why when one that is creative comes along, it’s noteworthy but is buried beneath so many other bad ones, like exceptional ones are PERKS OF BEING A WALLFLOWER, FAT KID SAVES THE WORLD, EASY A, BANDSLAM

I realize I’m not in the demographic, but I can look back on teen films of the past or of my generation and still feel the same feelings or at least that same nostalgia today they are so forgettable and disposable. Like they are off the assembly line then when the film doesn’t work they release it as unrated on DVD and hope it sells some more and unrated is a boob shot implanted or a deleted scene or two of outrageousness