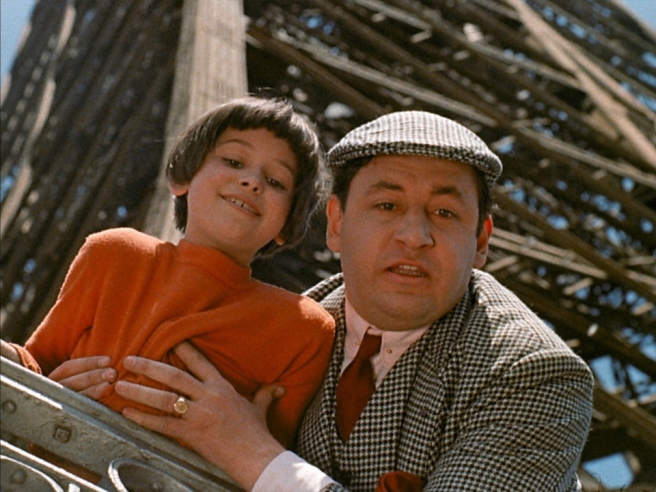 With her mother away for the weekend, a brash and precocious ten-year-old country-girl sets out to explore Paris during a Métro strike, under her uncle’s not-so-watchful eye. Can a little girl cause so much chaos in the heart of the city?

This film is practically a kids film for adults. Even though the humor is childish and it stars a child in the middle of a mostly adult cast. It’s a farce about French society.

The camera never seems to stop moving and even when it does the characters and backgrounds don’t seem to. They stay lively and energetic. Together with the grand performances. The film comes off like a live action cartoon. It’s just so over the top.

There is no real plot. Things just seems to happen a lot of times not for any particular reason.

The film feels like it comes with a certain pedigree that never quite feels juvenile. Though it does feel magical and almost other worldly

The production is grand it seems to travel all over Paris and use a cast in front of a lot of extras in the background as crowds. Where it looks like they just filmed in the streets with no permits. Before you show it to children you might want to Know that There is some bad language but not harsh and vile.

The film is virtually Paris seen through the eyes of a 10 year old girl. It just feels so enriched cultured yet goofy. The film has an infectious energy like a Benny Hilll episode with more artistic leanings.

The film is directed by Louis Malle a director who while he was alive. I unfortunately only saw his film THE LOVER, but now after his death only recently have tried to catch up on his films. First the excellent ELEVATOR TO THE GALLOWS, PRETTY BABY and now this. He usually made slow penetrating dramas with tons of emotional scenes and slow burning plots.

Here the film Is so madcap, funny and slight that it amazes me the range, skill and restraint as a director. You wouldn’t figure this film to come from him as it allows him to show his range.

It has a sense of fun and moves too fast to be a Wes Anderson film though it did influence MOONRISE KINGDOM it seems.

Shows off the French culture of the time while also showing off French landmarks. The energy never stops fully even the ending and credits after.

This is one of those films where you can say they don’t make them like this anymore and while that is great to truly make this movie one of a kind. It’s a shame there isn’t more daring in cinema especially for children who are wild with imagination. This film proves dome never truly lose it.