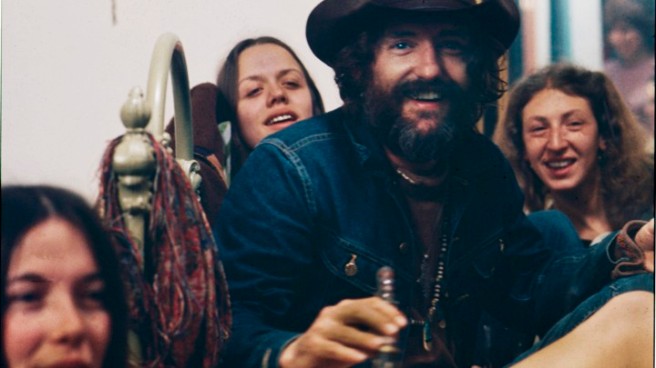 A documentary about actor/director Dennis Hopper, showing him at his home and studio putting together his film THE LAST MOVIE

This 1971 documentary revolves around actor/Writer/Director Dennis Hopper and chronicles him as he edits his second feature film THE LAST MOVIE.

This shows him drugged out and continuously chasing women but essentially how hard it is for him to edit the movie with so many distractions.

This documentary does offer up some history on him, but also letting us see him in his element at the time. Which is a kind of commune he has set himself up with hanger on’s and hippies mostly female. He comes off fascinating as a kind of obvious wreck that is coming and also pretentious. Here he is young, confident and handsome. Yet still a bit lost.

Watching this film you see how he could have played it been Charles Manson only Hopper actually has talents and skills.

If you have heard stories about him. Nothing here is any surprise except you get to witness some of it. As we watch him in his element. Where he talks to hippies talking over the women who try to have an honest dialogue with him or debate him. Yet telling the camera how much he is for women’s right but coming off more misogynistic throughout. He tries to discuss his artistic process and pontificates endlessly about its He seems to play to his obvious crowd of followers who again are mostly Female. Who seem more to be his personal harem.

Towards the end the film and he just gives itself to his sexual whims. As he seems more interested in seducing the women around him onto group sex. Which gets rated r graphic with plenty of his own nudity. As if anything he is more preoccupied with that the. Anything else and seems the only time he actually puts any effort into anything.

We don’t learn much about THE LAST MOVIE or the filming of it. Which was why I originally wanted to watch this film in the first place.

Dennis Hopper comes off as quite smart though also full of shit. It’s amazing how candid he ends up being. Also arrogant and insecure as he tries to live up to the outlaw myth that surrounded him at the time.

He is so many other things in this film obnoxious, scattered and debaucherous yet unforgettable.