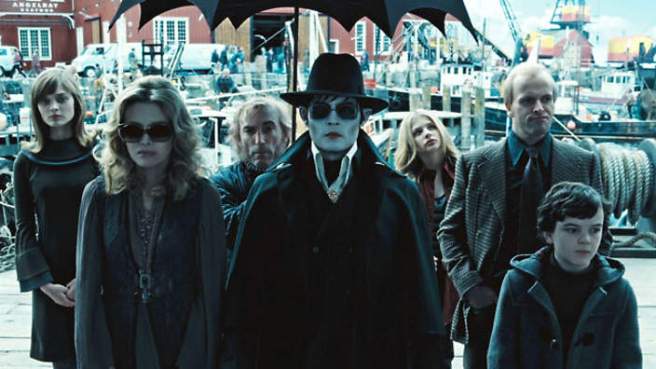 Dark Shadows is a melodramatic comedy following the misfortunes of a vampire named Barnabas Collins. Centuries ago a witch had sought revenge upon the Collins family following her and the man’s discontinued love affair. To his travail she set a curse on Barnabas turning him into a blood feeding monster and locking him away for years. Later he escapes from his imprisonment and sets out into his evolved hometown. And nothing is as it once was.

I will be the first to admit. I might have pegged Tim Burton wrong as far as how bad this film would be hiding by the previews and fearing he had lost his touch.

Now while of what I have said about his films is true. The part about trying to popularize things he was interested in or inspired him as a kid and trying to modernize them in particular.

It still feels like a bit of a cash in. Though I will Say one that has a general warmth or at least feeling of interest and passion from the filmmaker.

I can’t say that I am a big fan of the television series on which the film is based on. I know he basics and that it was more of a melodramatic soap opera. That was rebooted in the 90’s as a television series. That I actually caught a few episodes of,

Now while this film definitely honors that tradition as at the heart of the film. The tangled romantic and sexual relationships are what drive the story. The film while keeping the campy tone high. Especially due to the committed performance by Johnny Depp that seems more comedic, but not entirely on purpose. He is just so believable in the role that his naiveness seems real.

Johnny Depp being his muse to a degree slips right into the role with the familiarity of a hand to a glove. While it is again a more showy comedic performance. It doesn’t seem as over the top or hammy as he can be in certain roles and films. There is a trust between director and star hat lets them both be comfortable and have a kind of shorthand. That brings a respectability they both seem to have for one another. –The film essentially plays like a culture clash comedy, with him rising into 70’s culture. Which offers more jokes and laughs then let’s say today’s more savvy and connected times.

It plays well as it also gives director Tim Burton to kind of parody the times, as well as be nostalgic to them. While serving his more gothic passions and feel.

It is certainly a bit of a departure for him a bit. As this film while relatively clean. Is the most sexual of all of his films. As it never gets raunchy, it stays suggestive more. In his previous films, sex never really seemed to enter the picture it was either romantic longing. Talked about (BATMAN RETURNS) or given a bit of erotic suggestion, especially with the women wearing tight bodices and dresses in Victorian eras (SLEEPY HOLLOW). As his films styles have seemed to appeal more to children or children at heart. His films also usually felt more like well crafted and styled live action cartoons to a degree. Due most likely to his former career as an animator.

That remains here, though with a more adult oriented vibe. The film manages to be quite surprising. At times with it’s humor.

Anne Hathaway, Lindsay Lohan and Jennifer Lawrence auditioned for the role of Angelique.

I will admit to being wary at first but generally finding myself enjoying the film. Despite itself. As it becomes more fun as it goes along.

I will reap heavy praise on the production values and effects. Even though at first it seems like the film sticks to his small town and house. It is brilliantly rendered and put together. The special effects, once it gets to the finale are truly spectacular and noteworthy. Especially when it comes to Eva Green’s character.

Other then Johnny Depp. Special mention must be made for Eva green. Who not only fits into Burton’s femme fatale mode. In body, shape and attitude. She rips into her role with an energetic glee. That she always seems to bring to her studio roles. Here she seems like she is having more fun and actually in her element. I hope she continues to work with Tim Burton. Who seems to really know how to use her. As even her chemistry with Depp is actually kind of hot.

The rest of the supporting cast fills their roles well. Chloe Moretz is used more then the film would have you believe and she seems more the cynical comedic relief in her scenes.

It’s nice to see Michelle Pfeiffer on the big screen again in her role here. She certainly fits her role perfectly. I only wish she had more to do in the film.

Jackie Earle Haley is perfectly cast. It’s a shame that for a while he was working constantly after his comeback in the film LITTLE CHILDREN. After this film he seems to either be more picky or slowing down in his acceptance of roles. It might be he is not getting as many calls. He is perfect here as Depp’s alcoholic Renfield to a degree. His is another character i wish had more to do In The film.

The film also has an interesting tone as Depp will slaughter innocents, but it seems only out of necessity and feels truly guilty afterwards. Which makes you kind of appreciate him even after doing these awful acts. Then again he films sympathies are obviously with him and show him as doing it only as a matter of survival. Especially as he is cursed.

At least by the end you don’t feel as if you have wasted your time. A nice popcorn movie. It just makes you wish that while this is fine. You desire for Tim Burton to get his hand on a script that is more artistic and utilizes his skill. As he has always been a studio filmmaker, but also has managed to find studio films that fit into his vision.