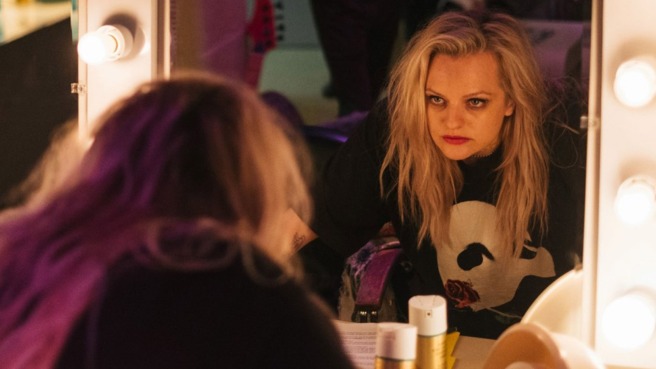 A self-destructive punk rocker struggles with sobriety while trying to recapture the creative inspiration that led her band to success.

Now with a film such as this one the title will either turn away potential audience members who might end up really digging this movie or attract others intrigued by what the title could mean.

This film takes place over 5 important days in a band’s life and career all after they have made the big time. As an all female independent band. Basically we watch them in the middle, them in the studio which is also their break up. Her meltdown before a concert. Her trying to get better and a kind of reunion of the band.

As we go through each of these days there are little hone video snippets of the good times when they are just beginning. Each day except really Recovery are all claustrophobic as they are usually in the studio it backstage all on top of each other with plenty of close up’s so that even when the camera roams it is on someone or is following someone. So that we are always with a character and can never escape or really back up.

Elisabeth Moss gives another stunning performance in this movie as an addicted rock star acting out all her emotions it seems all at once. She shows all sides of the character and is fearless. As she is not afraid to look and or show the monstrous side of this character. While her performance is overshadowing and great. The rest of the cast is strong and memorable also.

What is so powerful about the film is that this is a story we have heard about with various bands but here we are given unlimited access to all of the emotions and breakdowns as well as some music. It’s a film where the story could have taken over but instead the characters carry the film and all feel true to life. Which is usually one of the strengths of writer/Director Alex Ross Perry’s films. That whole they might be easy to breakdown in a story sense that comes across more as generalization. They are usually powered by the characters and the decisions made by them and often don’t end up with necessary happy endings or even with everything resolved. Though they manage to always be felt and leave some kind of impression on you.

The Recovery scene is certainly a change of pace where it slows down the intensity of the movie and grazes for a bit while still being true to itself and staying strong in it’s rhythm. Though being light in it’s process. It is revelatory and keeps her performance from being too one note. Or just repeating the same ones.

The film is hard to summarize completely though it is an experience that is braining but feels worth it by the end. As nothing is tied up in a neat bow but also doesn’t give off false promises that some films of this nature can offer up. Though by the end you feel like you are at the completion of a journey.

The music in the film fits the times and the types of bands that are featured. So it feels authentic but also nostalgic

Also feels like a film that could only have been made after those times. As it offers a window but also a bit of nostalgia. As people of a certain age can imagine any of the bands they remember who might have suffered the same fate due to an unstable center and/or lead singer who is a legend to the audience but a wreck to all of those around them. As they believe all the hype about themselves and are dealing with issues never really revealed.

The film feels like classic filmmaking that seems renegade but gives it’s all to an experimental style that is technical from but also feels challenging in trying to get the most out of the form and actors. Where it feels like Elisabeth Moss’s character is going through her own REPULSION performance only instead of being alienated and alone. She is surrounded by others and we get to know each of the characters point of view and their dealings with her, but no matter how off the wall she acts. She never becomes a caricature and we slowly get to know her and her circumstances.

This movie is so raw in It’s emotions.

It’s really different and an accomplishment from Alex Ross Perry whose films have been hyperverbal and full of unsavory characters and dispicible injured leads but here there is a sense of loss, pain and hurt and feels dramatic and has a certain depth we might not have seen him use before or explored previously

This is not a film that can easily be tied into a bow but it is definitely effective and something original. Though some might have a tough time sitting through. Think of The Julianne Moore Character from MAGNOLIA and build a film around her as the lead and those who have to deal with her from a sense of dependence, duty and love.