The bodyguard, Michael Bryce, continues his friendship with assassin, Darius Kincaid, as they try to save Darius’ wife Sonia

This is a movie that seems rushed to make money off the surprise hit of the first film and this time offers more Salma Hayek that the first film. Where she was a memorable supporting character.

This film offers a lot more of her including in her low-cut outfits and even a sex scene that is more comedic than sexy. Though the film gives her a chance to shine.

The film is more aimed at being a comedy with action in it rather than the other way around and as hilarious as the film is you never take it seriously and just try to have fun. As much as the cast seems to be having.

This film offers up recognizable cast members new to the franchise in surprising supporting roles. Though luckily it seems as soon as they wear out their welcome they either disappear or are dispatched.

They try to sideline Ryan Reynolds a little. as once again his character is going through confidence problems and here he has decided to not be violent throughout. He is involved in the action sequences. As more the straight man who keeps getting punished violently while all around him kill and fight. Which might be to make room for Salma Hayek to have more to do and be part of the action. He for the most part is abused throughout

What works for these films is that while they are silly and quite stupid. They stay entertaining and are never boring and come off as guilty pleasures more than anything else. Especially by the end which is just ridiculous.

These films feel like the CRANK movies only not as over the top, campy or low brow. They are dirty And they all feel like they have the energy of an energized bunny or play out like violent love action cartoons more than anything anyone can really identify with.

A fashion show in Paris draws the usual bunch of people; designers, reporters, models, magazine editors, photographers. Lots of unconnected stories which all revolve around this show, and an all-star cast.

This was my third official Robert Altman movie to see. Though unfortunately not in a row. I remember the film having a successful music video and soundtrack before it even came out. Unfortunately the movie didn’t match the soundtrack’s success. That included the hit single “HERE COMES THE HOT STEPPER”

After the success of THE PLAYER it seemed like Robert Altman was having a comeback and he wanted to take on another world/culture. His last film was SHORT CUTS and that was more interlocking stories then taking a look into or try to dismantle another popular subculture from the inside. That was more foreign abs international but also glamorous.

Allowing him to use his dual methods of ensemble casts. Where even though the actors are playing characters here it feels more like an out and out comedy. So they are all over the top. Not as serious, nor are there any serious moments throughout.

It might be understandable him taking on this movie after the more serious and sad SHORT CUTS, but while this is more lighthearted it also is a challenge. As this would be his most mainstream film in a while. As he was taking on a subject that was very popular and most audiences might not be used to his films and their outlook.

This film is set in that world of fashion to tell ongoing stories and big inertia where the characters cross paths. All in all, it stays humorous with Kim Basinger playing an on air television reporter. Who comes in and out to explain certain relationships but is clueless about fashion. So that it feels like a replay of the reporter in the film NASHVILLE.

The film ultimately never encapsulates any meaning or why we are so enraptured by the glitz, glamour and celebrity of the fashion world. So that in the end it comes across as misguided and empty as the world he is capturing. As fashion constantly reinvents itself. It proves there are No rules and seemingly no depth. Not to mention watching this film feels dated. It’s very episodic.

Marcello Mastroianni and Sophia Loren get to reference classic scenes and relationships from their career and previous collaborations and give a scene where you believe they are remaking a classic moment only for it to end with a joke.

Which is pretty much the mood of the film. As all plots and stories seem to end in that kind of manner.

The film’s cast as usual is filled with stars. The biggest of whom seem here in an unneeded story but help make it more commercial. As Tim Robbins and Julia Robert’s seem stuck here in a bad afterthought of a romantic comedy plot line.

This film seems to find Robert Altman riding his high horse. This film goes for more populism but leaves viewers puzzled. As it is more artistic and voyeuristic than plotted.

This film is like a bunch of short stories stretched over fashion week.

The film is flashy and appeals to itself but ultimately is frustrating, especially with all the talent involved. Where you are left to wonder what could have been.

Everyone is well dressed but we are left as confused as Kim Basinger’s reporter. Where we wonder what this was all about.

It seems like the director was unfocused but having fun. Filled with recognizable names, good actors, supermodels and models of the time. Where the film feels flirtatious as it always has a wink to give off

Can’t tell if the film was rushed or cut together fast with a murder mystery in the middle that largely takes a backseat or is forgotten. Ultimately the film comes across as a farce. That feels like it is being made up as it goes along. Though with a stylish hand guiding it. Who leaves to perplex the audience. 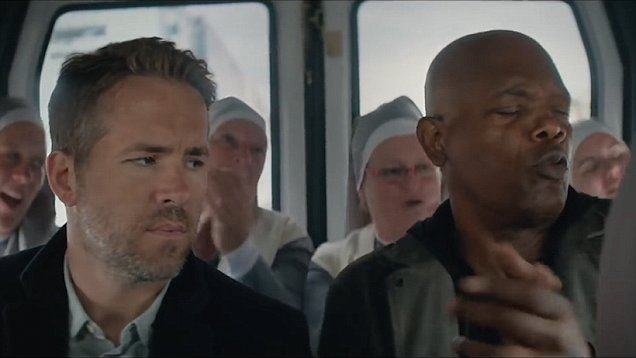 With his reputation in tatters after a painfully unsuccessful delivery of a distinguished Japanese client, former triple-A executive protection agent, Michael Bryce, two long years after the disgraceful incident, is now reduced to a mere second-class bodyguard for hire. Under those circumstances, Bryce would do anything to prove his worth once again, and as a result, it won’t be long before he accepts an offer from Interpol to escort the renowned international assassin Darius Kincaid from Manchester to the Hague. The task seems simple: Bryce only needs to transport the contract killer from point A to point B, nevertheless, Kincaid, as the only one with the guts and enough hard evidence to testify against a tyrannical Belarusian dictator, is an obvious target, while the trip to the Netherlands is long and hazardous. Without a doubt, this a race against the clock as the mismatched duo will have to put aside their grudges, in a non-stop concerto for bullets.