Celeste and Jesse have been best friends forever. They dated in high school, got married, and now they’re getting divorced. Their best friends don’t think they can maintain their friendship throughout the dissolution of their marriage, but Celeste and Jesse don’t think there will be a problem. But that’s before Jesse gets into a relationship that Celeste doesn’t think he can handle, and Celeste finds it harder to move on than she originally thought.

This is a hipster romantic comedy, because as it seems to use it’s style and story as a sense of individuality. It also feels pretty basic.

The film revolving around life after the happy ever after Scenario and dropping it from a dream-like existence to a harsh reality while keeping it light is a welcome touch.

I will admit a bias as to being a fan of Rashida Jones. Who is luminous and who I applaud for making her character kind of complex by being the controlling type and not apologizing for it. While also being brave enough to be fearless and show herself in a non-flattering light as well as displaying her character’s more embarrassing misdirections.

She co-wrote the screenplay which has her playing what seems to be her type in many of her roles, but here allows us to see the person and depth of that character for once. She really makes it work and come through.  This is one of the new breeds of romantic comedies that I am thankful for not swimming In sentimentality and having beats that feel real where you don’t know how to react and moments that feel truthful though through the whole endeavor the film keeps a light comedic tone.

It’s also nice to see Andy Samberg play more of a straight role and not be a goofy type. His humor here comes through but comes off as more charming than anything.

The subplot with Emma Roberts seems a little unnecessary as it feels more like satire and just needed a new character to kind of tell her about herself and for her to actually take it under consideration.

For all the winning pieces that the film has the one problem I have is the direction style while I applaud trying to make scenes moody and artistic. it also comes off as pretentious and distracting. Using a lot of styles when it’s not really needed comes off more like an extra dressing when not that much was needed. I could see if the material was thin or the film asked us to read more into it through visuals, but all we need is pretty much conveyed through action, dialogue, and performances.

So the camera work seems like it’s trying to cover up for something lacking which the film isn’t really. Maybe it was the director liking to have a bunch of coverage or having a chip on his shoulder trying to masquerade its Limited budget. Which is a game as I have enjoyed the director’s previous film THE VICIOUS KIND so much. He still has made a good movie here it just feels like he went a little overboard in trying to be subtle.

I like this film even at times when it feels like it is trying too hard to impress, where it seems nothing can be basic it all seems like it has to be cool for some kind of mass appeal to the audience. The film isn’t shallow, bit you will only discover that if you Give it a chance

A man in his thirties travels to a remote cabin to reconnect with his estranged father.

This is a movie that will take you by surprise and keeps you guessing. Don’t expect a big change in your thinking type of film but more than a secretive kid in the corner who shocks you with his talents but still seems creepy. As each time you believe you have it figured out it adds something. A film best to go in blind.

As one of the main desires of the film is to keep you off-center. So that you end up just as confused as the main character. The twists come not only from the plot but from the characters. Though the film does have a dark sense of humor.

This is a movie that gradually adds things as it goes along and still Manages to stay small-scale. Even though at times the film seems to be going towards the supernatural or at least spooky. It still manages to stay somewhat believable though it has its quirks.

It also feels a little hipster-Ish when it comes to the main character and its Style. Even if it had a more pure demented heart.

This film feels full of ideas and imagination that feels lost. As it more feels like an oddity that more belongs in a previous decade but is oddly welcome in this time period and quickly sets itself up in modern-day. Yet managing not to depend on so many modern-day conveniences.

Though ultimately it does leave you a little disappointed because as it keeps building towards bigger things and you expect something huge but after a while, it seems to calm itself and stop. Then You realize this is it and you kind of were hoping it would keep going.

It also feels like at times they are making it up as they go along and try to work more on characters than story.

Have to wonder sometimes if Elijah Wood internationally goes after movies that leave him tortured and somehow mutilated after this and the film PAWN SHOP CHRONICLES.

A young boy stays with his aunt and uncle and be friends with his cousin, a boy of the same age who shows increasing signs of violent and psychopathic behavior.

I remember being excited about this film when it came out. As it held the promise of Macaulay Culkin to be playing against type as an evil child. Though for some this might have been more of the same who might have seen his character in home alone as a sadistic bully himself.

I even went to see this movie in theaters twice. Sure it’s a modern update on the and seed only with boys and more of a budget and an openness that the movie didn’t offer at the time.

He does excellent In This film. As he pretty much sets his cousin played by Elijah wood up to be his patsy. Getting him to trust him and bringing him into his little schemes and then when his cousin decides to be honest and do the good thing. Culkin’s Character beats him to it only making wood look guilty as he has more evidence to put him away.

At first, we believed that Culkin’s character might just be going through growing pain until we found out even before he got there he was up to no good. It seems that Eve. As he might try to do so later. What he craves is attention and anytime someone is a rival for his mother’s affection then Off they go

At first, the film is played more off of thriller as including a great action sequence of a car crash on a highway and an ice skating incident gone wrong, but once it really settles in and watches, you can really see more the psychological aspects of the film being panted out

Director Joseph Rueben offers crisp and sharp direction. That matches the chilly atmosphere the town is set in. This actually is one of his better films. Definitely one of his most popular. So you can say the films offer thrills and chills

Something interesting that Macaulay Culkin was a child star and was killed in two movies that he starred in. Think of that anytime you swear times have changed or movies are darker and more mean-spirited than the ones in the past as far as treatment of children.

Though His performance does put him in a different lane and offers him a chance to show range, but also gives plenty of opportunity to those more annoyed by him to see Him get a comeuppance. It was just nice to see him in something different, not cookie cutter and cute

What works for the film is that despite its high concept simpleness and stunt casting. It’s actually deeper than what you expect. As it does kind of harm back to that Spielberg era. Where kids could star in Movies and kind of create their own world and social relationships. Where adults were around but they weren’t the main focus they were more supportive.

This was the first movie I even remember seeing Elijah wood in and he is impressive in one of his first films as a full-fledged lead.

As even though this film is rated R. It also seems more made for children to enjoy or at least relate to more.

An actress named Jill refuses to have dinner with Nick, a fan who won a date with her in an Internet contest. In return, a guy named Chord, posing as Jill’s campaign manager, helps Nick to follow in the footsteps of the actress from his own computer. Nick starts a game in which he realizes that he is only a puppet into the maniacal plans devised by Chord, to hunt down the star

END_OF_DOCUMENT_TOKEN_TO_BE_REPLACED 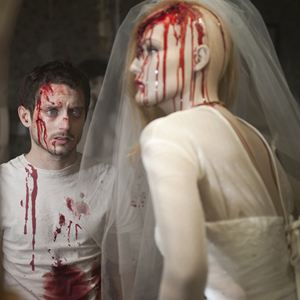 Based on the original Screenplay By: Joe Spinell


Just when the streets seemed safe, a serial killer with a fetish for scalps is back and on the hunt. Frank is the withdrawn owner of a mannequin store, but his life changes when young artist Anna appears asking for his help with her new exhibition. As their friendship develops and Frank’s obsession escalates, it becomes clear that she has unleashed a long-repressed compulsion to stalk and kill.